As Lightning Protection Contractors
We Provide More Than Peace of Mind

One night, Rebecca was watching the local news when she saw a report on a fire that was caused by a lightning strike. The family’s home was nearly destroyed. Forced to seek temporary shelter, these folks lost cherished possessions they could never replace.

“I really hadn’t given lightning rods much of a thought” Jane said, “but after seeing the horrible damage and hearing about this family’s tremendous loss, I began to seriously consider it.” Rebecca did her homework. “I viewed the educational materials on various websites. I learned that credentials from the Lightning Protection Institute and Underwriters Laboratories are keys to choosing a qualified installer.”

Based on her research, Rebecca chose Paxson Lightning Rods. According to Rebecca, “They’ve been in business since 1923 and have protected buildings in Longwood Gardens, Hagley Museum, and Fairmount Park. That was good enough for me!”

Speaking for her family, Rebecca says happily, “We dreaded the approach of thunderstorms and lightning. Now we love the feeling of safety and confidence we have when the skies darken and we hear thunder in the distance.” She added, “It’s especially reassuring when we’re away from home. We might worry about leaving enough lights on, but we don’t worry about losing our home and our family treasures to a lightning strike!” 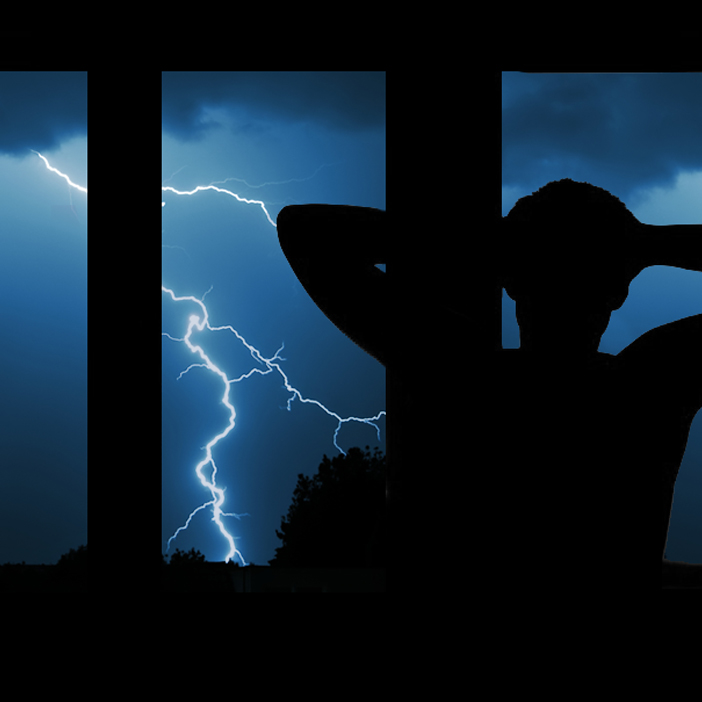 Twenty-five years ago Arthur and Sheila made the decision to install lightning rods to protect their family and home. They also decided to hire Paxson Lightning Rods to do the job — two decisions they will never regret!

More than 20 years later when Arthur and Sheila’s son bought his first home, Mom and Dad knew the perfect gift. Arthur and Sheila wanted to provide their son and his young family with the same safety and security that they had. Deciding who would do the work was an easy call. The Paxson team had unquestionably earned their trust from the initial design through the installation and maintenance.

The Paxson team provided a comprehensive estimate including comprehensive schematics and pricing. Once the details were finalized, the project began to move forward. With very little disruption to the comings and goings of a busy young family, the Paxson Master Designers and Installers put the barely-noticeable equipment in place. Arthur and Sheila are happy to know their grandchildren can listen to the rumbling of thunder and watch the display of lightning bolts while safely shielded by a Paxson lightning protection system.

Arthur and Sheila know from personal experience this is truly the gift that keeps on giving. 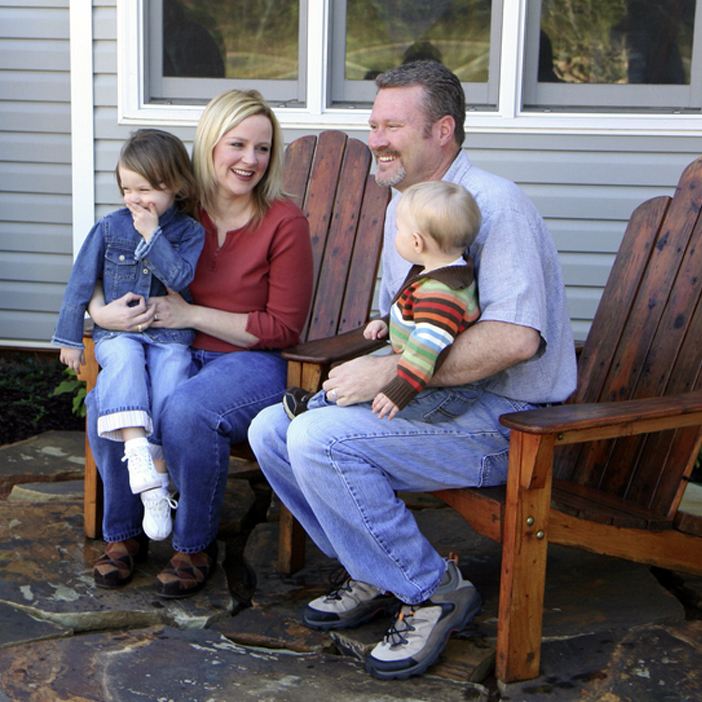 Lightning Rods Won’t Ruin the Aesthetics of Your Home

Scott is admittedly very particular about the appearance of his home. No one would argue that his house is impressive and one of the nicest in his community.

When Scott learned that thunderstorms had caused significant damage in a nearby town, he began to consider installing lightning rods on his cherished property. He was, however, concerned about having rods, points, and wires mounted on the exterior of his beautiful home.

A representative from Paxson Lightning Rods met with Scott and walked him through the process from design to installation. Detailed drawings of the project convinced him that the all of the necessary equipment would be carefully blended with the existing architecture to maintain the aesthetics of the structure.

A Paxson Master Designer assured Scott that the conductor cables would be tucked under eaves and that any copper wiring that could not be hidden would eventually darken and blend in with the house, or could be painted over. Scott learned that since ground rods are driven ten feet into the earth, shrubbery would conceal the necessary connections. The Paxson pledge for quality installation guaranteed that all disturbed earth would be replaced.

Although Scott was impressed with the scope of the Paxson services, he was still a little nervous. That’s why he asked for references. Scott drove around and viewed some examples of Paxson work and was able to see for himself how a Paxson lightning protection system is seamlessly integrated into new and existing architecture. Pleased with what he saw, Scott was ready to authorize the work.

Visitors to Scott’s home have commented that they can’t even tell there’s a protection system in place. For Scott, that’s the true beauty of a Paxson project. 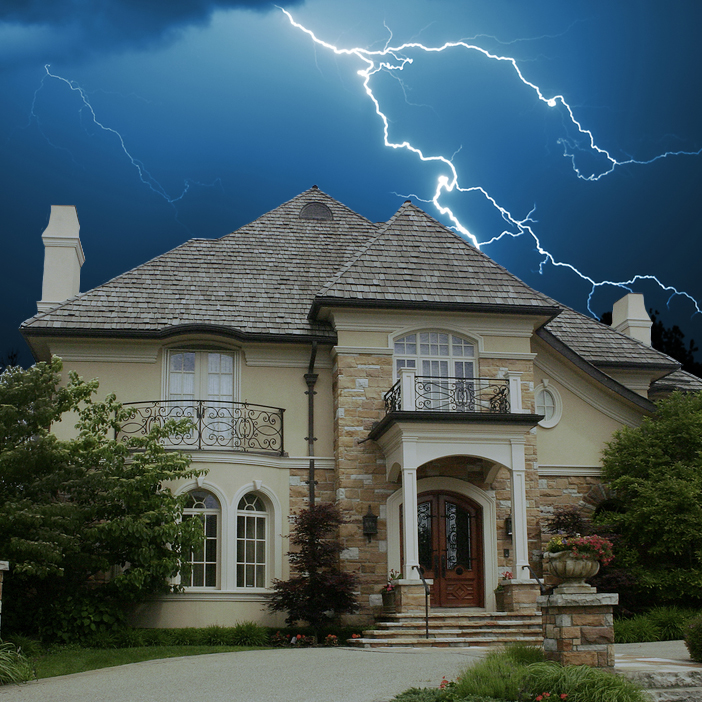 Conductor cables would be tucked under eaves and copper wiring that could not be hidden would eventually darken and blend in with the house, or could be painted over.

One of several workers at a locally-owned produce farm was hard at work in one of the fields, when a fast moving thunderstorm developed unexpectedly. Tragically, the worker was struck by lightning. The force of the bolt threw him from the tractor to the ground. Although he was not seriously harmed, the event left him very apprehensive and wary.

The owner of the farm recognized how this incident could lead to more serious consequences and was very concerned about the future safety of all his employees. The farm’s main house and the barn has been protected by Paxson Lightning Rods for many years. And after this unfortunate experience, the farmer was determined to protect all buildings on the property — most importantly the staff housing, as workers receive on-site housing as one of their employment benefits.

Paxson Lightning Rods worked to develop a comprehensive plan to ensure that every building on the farm would be safe from the destructive force of lightning. The first step was a thorough inspection of the lightning protection equipment already in place on the main house and barn to check for any damage over the years and to assure that the system was still in line with the latest safety codes.

Paxson’s Master Designers and Installers then created a lightning protection proposal that could be implemented in phases allowing the farm to function without interruption. The farm’s owner was greatly relieved to know that his employees and his property would be more secure from the fierce and unpredictable nature of thunderstorms. 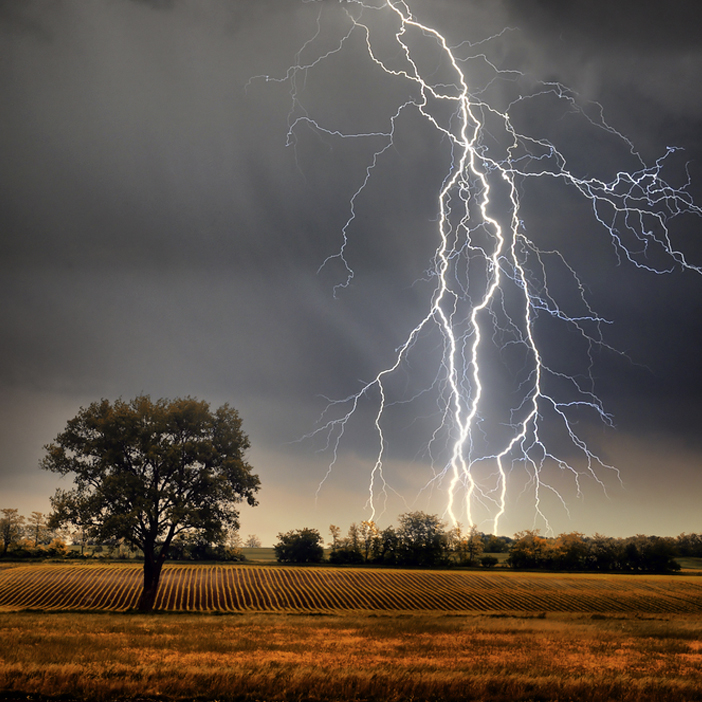 Jason’s familiarity with lightning came from a very up-close and personal experience. A bolt of lightning suddenly struck his home causing a fire in the attic. Fortunately, firefighters prevented the blaze from spreading into the rest of the house. Unfortunately, the resulting water damage was extensive.

Moving forward, Jason knew that restoration plans would have to include a lightning protection system to keep his family and their home safe from harm. Jason chose Paxson Lightning Rods based on their years of experience, their knowledgeable staff, and their commitment to quality.

The Paxson team coordinated their work with the schedules of other contractors during the restoration. This cooperative spirit made the project proceed smoothly for everyone — especially Jason and his family! The installers worked efficiently with respect for the visual as well as the functional aspects of the design. The result was peace of mind for Jason and his loved ones. 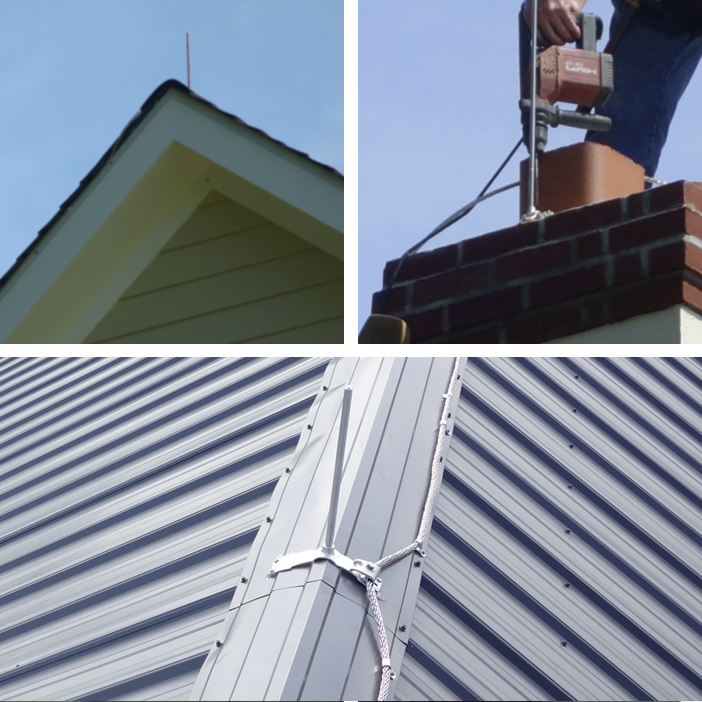 It was a dark and stormy night, but Jane didn’t know how powerful and devastating the lightning bolts would prove to be. A sudden explosion and scorched bricks on the ground from her neighbor’s chimney provided a wake-up call. It was heart-pounding proof and a hair-raising reminder of lightning’s violent impact. Jane and her husband had a close call, but immediately knew what they had to do. They didn’t want to compromise the aesthetic beauty of their new country home, but they were determined to add a system of lightning protection that would protect their investment.

The client called Paxson Lightning Rods for help – a family-run business with highly experienced professionals, who offer full service protection and expert workmanship. Jane and Tom were soon comforted by the thoroughness and attention-to-detail that the Paxson team paid to each measurement and architectural detail from the dormers to the chimney and from the roof to the foundation. They were presented with a comprehensive estimate for the lightning rod retrofit, including a sketch showing the layout of the air terminals, the wiring, and the ground rods.

Once the plan was authorized, the installation began. A Lightning Protection Institute Master Designer and Installer — along with a Paxson team of experts carefully attached the air terminals (sometimes called points) to the roof, the chimney, and the dormers. Every step of the installation of their lightning protection system was in compliance with industry safety standards. Tom and Jane were surprised how inconspicuously the copper cables were tucked under existing roofing materials and rain gutters — they were nearly invisible.

The cables and air terminals were connected to a long copper ground rod that was buried ten feet under ground forming one continuous, discrete system with no disruption to the design and beauty of the structure itself. Jane and Tom were amazed and extremely satisfied with the results of the Paxson project. Next time the skies darkened and the rains came, Jane and Tom were confident their home and family were safe from lightning strikes and power surges. They highly recommend Paxson Lightning Rods to anyone who wants the same peace of mind.

“If the lightning that hit my next door neighbor had been a few feet over, it could have destroyed their entire home…or mine. Too close for my comfort, that’s for sure.”