Lightning is one of nature’s most dangerous forces. Below are some interesting facts about the power lightning possesses.
To learn more review the FAQ page or check out the Links section. 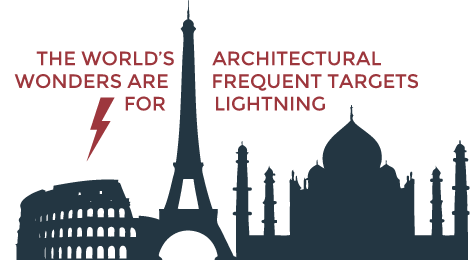 The Vatican, the Eiffel Tower, the Statue of Liberty, Mount Rushmore, the Brooklyn Bridge, the Seattle Space Needle, the Tower Bridge in London, and the Saint Louis Arch among others are repeatedly struck by lightning. The Empire State Building is hit nearly 100 times per year.

The damage caused by lightning each year in the United States alone is estimated to be $5 billion.

The Fourth of July is historically one of the most deadly times of the year for lightning in the US. It’s the time of the year when more people are outside on the beach, golf course, swimming pool, ballpark, and in the back yard. In general, there are more fatalities from lightning than from tornadoes or hurricanes in one year.

Lightning often strikes far away from a thunderstorm, with a bolt of lightning traveling as far as 40 miles.

Even though the odds of being struck by lightning are 1 in 12,000, some famous people have been the victim of nature’s electrical fury. Lifestyle guru Martha Stewart, actor Jim Caviezel, pro golfer Lee Trevino, and Cleveland Indians pitcher Ray Caldwell all lived to describe their close encounter with lightning.

People who are struck by lightning are often temporarily covered with what’s known as red Lichtenberg figures, which are branching tree-like patterns created by the passage of high voltage electrical discharges along the skin.

Astraphobia is the fear of thunder and lightning.

The energy from one lightning strike could power a 100-watt
light bulb for 3 months.

Lightning starts with a negative charge in a cloud and a positive charge below on Earth. While the two charges attempt to create a circuit, the air between the clouds and Earth blocks the connection — until a giant spark of electricity discharges, moving to the ground in a powerful downstroke. It’s nature’s way of balancing positive and negative charges.

When a lightning bolt hits the ground it is so hot that it can melt and fuse sand, silica, and some soils, forming fulgurite – a hollow tube extremely similar to glass.